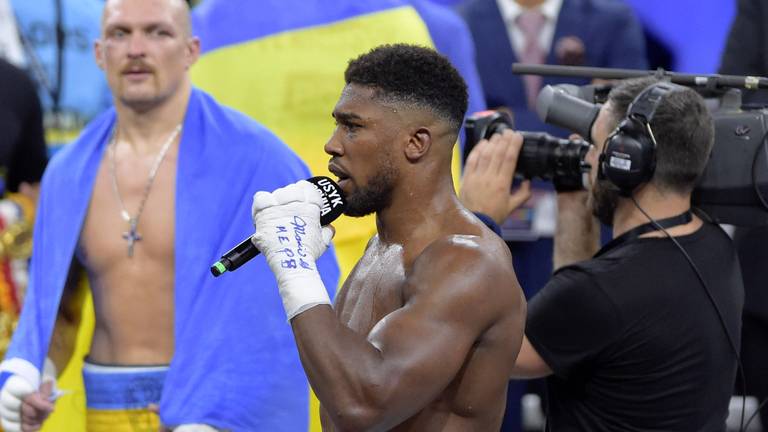 Anthony Joshua concedes his third defeat in the last five fights against Oleksandr Usyk. Is his time up already? Yes,

Anthony Joshua conceded his third defeat in the past five fights against in the rematch against Oleksandr Usyk and caused further irritation afterwards with your bizarre behaviour.

While Ukrainian Usyk now sets his sights on a unification fight against Tyson Fury, the prospects of Fury’s fellow Brit Joshua are uncertain.

At 32, is “A.J.” already signed off as a top boxer? Yes, believes former German world championship aspirant Axel Schulz hanging up his gloves.

“It’s time for Joshua to say: It’s been a great career,” says the 53-year-old: “With the first defeat against Andy Ruiz, he gambled away his inner strength – and the rematch wasn’t that great either. He has now rightly lost both fights against Usyk.”

From Schulz’s point of view, Joshua is still struggling with the consequences of his first defeat of 2019: “Joshua’s defeat against Ruiz was the crux of the matter, he didn’t even have a fight – and we were all laughing about the chubby Ruiz before the fight. You can’t underestimate what that did.”

Schulz adds: “The head plays a very big role in boxing, I think even more so in the heavyweight division than in other weight classes. The hard punches have a different effect on you, also mentally. If you lose your confidence, it’s very difficult. “

“When you don’t trust yourself anymore, a lot is lost “

The problem he attests to Joshua, Schulz knows from his own experience, especially from the unsuccessful world championship fights against Francois Botha and Michael Moorer after his near-sensation against the icon George Foreman in 1995.

“I was always asked: Why don’t you fight more?”, Schulz remembers: “The problem is: When I do that, I open myself up to the other guy’s punches and that can backfire. And the moment you no longer trust yourself, everything gets out of balance, a lot is lost. It’s hardest to fight your way back out of a hole at heavyweight. “

“Usyk is insane, Fury a grenade “

Meanwhile, Schulz is very excited about the potential unification fight between Fury and Usyk – who impressed him greatly against Joshua: “Usyk is insane. The way he punches often looks unspectacular. But you can see from the result: there must be undreamt-of power behind it.”

However, Schulz does not dare to estimate how it would look against Fury, who has a stronger size, weight and reach advantage: “Fury is on another level than Joshua, a grenade, you can’t control him and you can’t estimate him. When Usyk fights Joshua, he knows roughly what he’s getting into, AJ pulls his boot through, he’s predictable. Fury? Not at all. You have no idea what he’s going to come up with in the ring.”

Fury’s special personality is also an X-factor: “I met him before the Klitschko fight, and at first you think: What kind of guy is he? But when you talk to him, you realise: He’s really clever in what he does. “

Whether Fury’s alleged resignation is also part of the game? Schulz guesses in any case: “If the fight is pushed through, he’ll be back. “