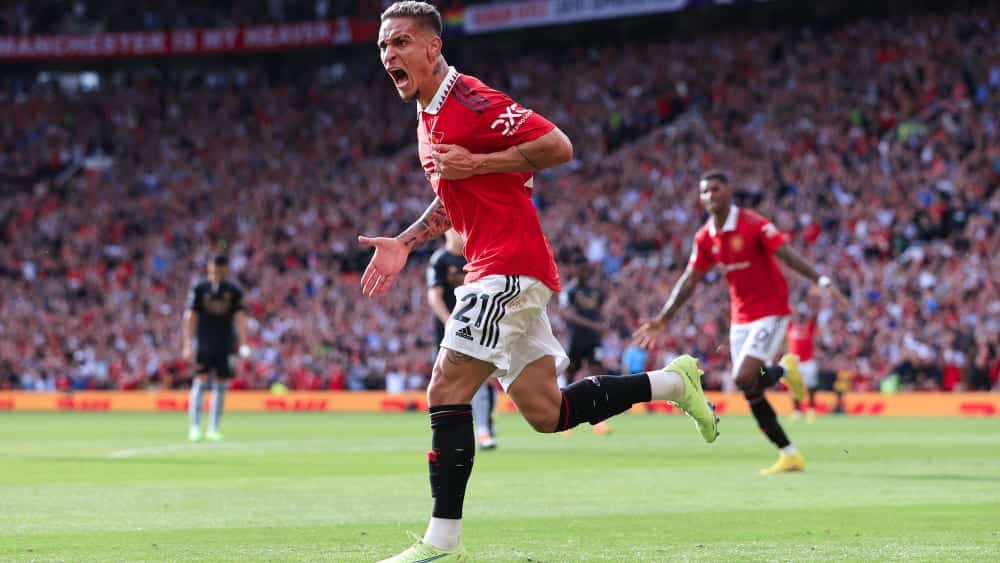 Arsenal’s winning streak has been snapped, Manchester United’s continues: The Red Devils owe their 3-1 home victory to their cool-headedness. Or even new signing Antony.

Even though leaders Arsenal had already collected their five before Matchday 6, Manchester United started the game at Old Trafford with plenty of determination, possession and new signing Antony – Cristiano Ronaldo and Casemiro were on the bench. The home side also created the first good chance with a direct shot at the second post through Eriksen (8th), but the advanced Saliba quickly matched him for Arsenal (9th).

Martinelli caught out – Antony cleared up

The opening period in Manchester had it all. Sancho followed up with a chance for United – Ramsdale parried (11.) – a little later Martinelli even turned away jubilantly (12.). However, because Ödegaard’s ball win against Eriksen had been preceded by a foul, referee Paul Tierney conceded Arsenal’s supposed lead again after a trip to the review area – tending to the right decision.

After this stoppage, the Gunners became more active in principle, but the game also became a little disjointed and two-fisted. Only after half an hour did Arsenal clearly take command, Martinelli and Gabriel Jesus had a double chance (32nd). Just in this phase, however, United took the lead, 100-million-man Antony completed a strong attack after Sancho and Rashford had worked together (35.). After that, the Red Devils closed down defensively.

The defence held after the break as Arsenal started with more possession – which was made difficult for the Gunners. But in the 52nd minute, Gabriel Jesus’ cross should have equalised, but Ödegaard stepped past the ball. Seconds later, Saka missed the far corner.

More and more, the clearly better guests wore down their opponent, whose defence now began to crumble. After a misplaced pass by Varane, it was finally Saka who scored the deserved 1:1 through Martinez’ legs (60th).

Afterwards, what had already happened before the 0:1 happened: Arsenal were clearly better, but conceded the next goal. Bruno Fernandes sent Rashford with a dream pass to Ramsdale, who could only look behind the ball a second time (66.). And now United didn’t let themselves down: A little later the home side attacked the depth again, in the last instance in front of Ramsdale Eriksen set up Rashford’s brace (75.).

The Red Devils did not produce much more offensively than that, but after the 3:1 they started to work on the concrete again – with success. Arsenal, who remain top of the table despite their first defeat, were only dangerous again through wild card Fabio Vieira (86th), but their winning streak is over. Manchester United’s streak continues, which means they are still in fifth place.