HomeBundesligaGnabry opens the scoring: FC Bayern are champions for the tenth time...
Bundesliga

Gnabry opens the scoring: FC Bayern are champions for the tenth time in a row 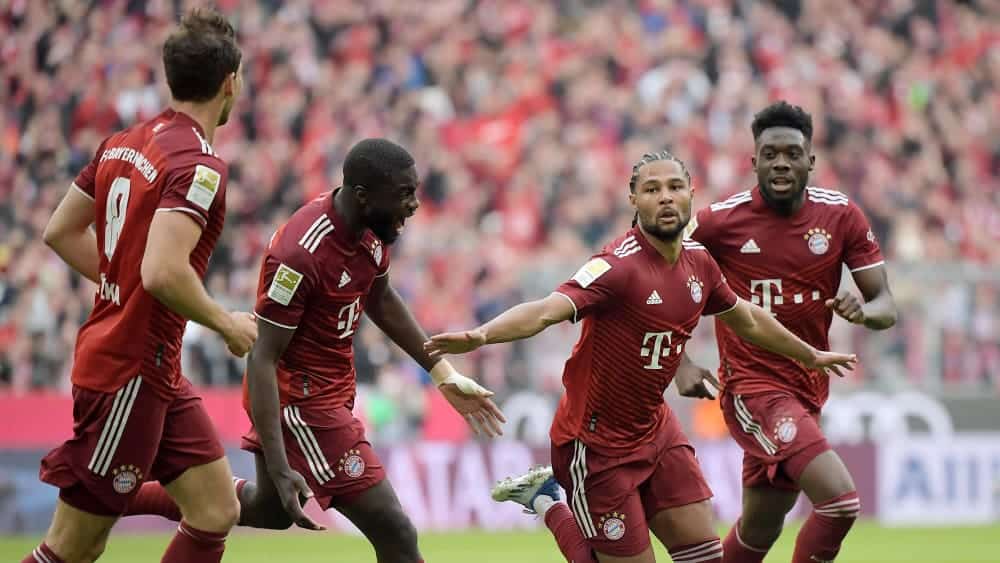 The Bavarians are German champions for the tenth time in a row! Against their direct rivals from Dortmund, of all places, the Bavarians made everything clear on Saturday with a 3:1 victory.


Bayern coach Julian Nagelsmann made two changes after the 3-0 win in Bielefeld: Hernandez and Coman started for Nianzou and Sabitzer (both on the bench). Süle, who will join BVB on a free transfer in the summer, was initially on the bench after coming down with flu.

Dortmund coach Marco Rose was plagued by a number of personnel worries before the match, with many players missing through injury. There were three changes compared to the 6:1 victory against Wolfsburg. Hitz started for the injured regular keeper Kobel (ligament injury), and Guerreiro and Reinier also moved into the first eleven for Witsel (infection) and Rothe (bench).

Dortmund started briskly at the Allianz Arena, went ahead early and obviously had their sights set on something. But despite a decent opening phase, the black and yellows were unable to create any chances. The Bavarians waited for a while – and then acted like the league leaders: Goretzka laid off a corner from Kimmich for Gnabry, who finished with an impressive volley into the top left corner (15th).

Fortan the hosts had the game well under control and hardly allowed anything. Only Haaland had a very good chance to score, but did not make enough of it and put the ball past on the left (27.). Bayern worked on the second goal and after Gnabry’s goal was taken back due to an offside position of Coman, the home side made it 2:0: Zagadou was put under pressure and played a wrong pass, via Kimmich and Müller the ball landed on the right side of the sixteen to Lewandowski, who easily scored his 33rd goal of the season (34.). The Pole almost added to his tally shortly before the break, but his low shot fizzed just past on the right (44th). Thus, the 2:0 lead remained at the break, the Bavarians were clearly on course for the title.

Can from the spot – tricky scene in the Bayern penalty area

BVB coach Rose had obviously found the right words at the break, because the visitors came out of the dressing room very well – and scored the equaliser. After a foul by Kimmich on Reus in the penalty area, a penalty was awarded, which Can safely converted (52.). The Westphalians almost added to their tally, but Neuer was on guard against Reus (54). It was now a completely open game in which Lewandowski missed (58.). Shortly after, Bayern was lucky, because after a duel between Pavard and Bellingham, there was no penalty. For referee Siebert & Co. too little for a penalty kick, although the Frenchman already hit the Dortmund player. So BVB sniffed at the equaliser and could then be glad that it was not 1:3, Hitz made a first-class save against Lewandowski (69.).

After this eventful phase, the game calmed down. Munich controlled the match with possession and kept Dortmund away from their own goal. In the final phase, however, the black and yellow team pressed again, Haaland first failed to beat Neuer (80th) and then put a volley over (81st). Just when you thought the visitors were on the verge of an equaliser, the Munich team put the lid on it: substitute Musiala scored dryly for the 3:1 final score (83rd).

The Munich team thus won its tenth German championship in a row against its direct rival from Westphalia – a feat that no team in the top 5 leagues had ever achieved before. For Nagelsmann, this means a direct championship title in his first year as Bayern coach.


The next match for both teams is next Saturday at 3.30 p.m.: Bayern are guests in Mainz, Dortmund receive VfL Bochum. In sporting terms, the match is no longer of the greatest relevance; Munich are sure to be champions, while Borussia, with an eight-point lead over Leverkusen, are almost certain to finish second. Before that, however, Borussia hosts a charity match on Tuesday (6pm) against Ukrainian champions Dynamo Kiev.