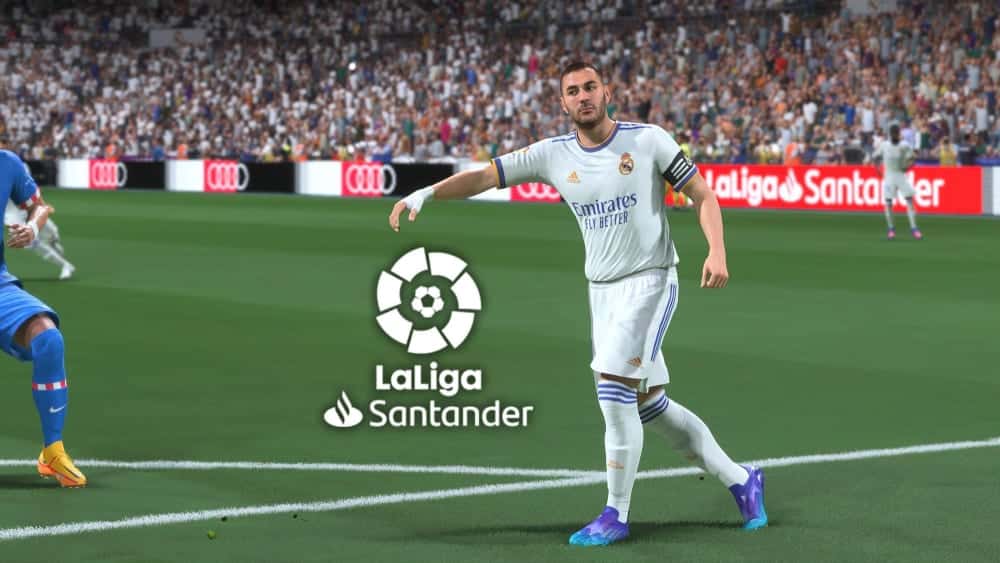 The TOTS voting for La Liga has started with 46 nominees for FIFA 22 Ultimate Team (FUT), and unsurprisingly champions Real Madrid have the most players

With a 15-point lead over FC Barcelona, the capital club can no longer be ousted from the top of the table four matchdays before the end of the season. Real are having an extremely commanding season in La Liga, and there has been little doubt for weeks that the “Blancos” will win their 35th Spanish title.


It comes as no surprise that the “Royals” have the most nominees for the La Liga TOTS in FUT 22 with eight players. Thibaut Courtois is the big favourite for a special card between the posts, while for the defence, ex-Bayern pro David Alaba has also been released for voting alongside Eder Militao.

Kroos only German in voting

In midfield, a familiar picture prevails: The trio of Toni Kroos, Casemiro and Luka Modric, who have determined Real’s rhythm for years, have all made it into the voting. The Madrid faction – at least the white one – is supplemented by top striker Karim Benzema and whirlwind Vinicius Junior.

Incidentally, neither city rivals Atletico Madrid nor FC Barcelona have the second most professionals in the La Liga voting – Sevilla FC is represented six times. Goalkeeper Yassine Bounou is competing with Courtois, and in defence a quartet of Jules Koundé, Jesus Navas, Marcos Acuna and Diego Carlos have been nominated.

On the offensive side, the Andalusian selection is thinner, with only Joan Jordan still to be voted for in midfield. The distribution is almost the opposite for Atletico: The former defensive bulwark does not provide a single defender, but with Joao Felix and Angel Correa, among others, two attackers.

Betis numerically ahead of Barcelona

From Barcelona, winter newcomer Pierre-Emerick Aubameyang and the also resurgent Ousmane Dembelé have missed out. The Catalans send Jordi Alba, Ronald Araujo, Frenkie de Jong and Pedri into the race. Numerically, even Betis Sevilla can trump the Barca and Atletico quartets.

The Green-Whites have a nominated defender and striker in Alex Moreno and Borja Iglesias, but their greatest hopes are in midfield, where Betis have three irons in the fire with Nabil Fekir, Juanmi and Sergio Canales. Celta Vigo, Real Sociedad and FC Villarreal each provide three players for the La Liga voting.

46 instead of 40 nominees for La Liga

Compared to the recent elections of the Premier League TOTS and the Bundesliga TOTS, there are even 46 instead of 40 professionals available for the Spanish top flight. Voting will close as early as next Friday, with the release of the corresponding special cards in FUT 22 scheduled for 20 May.

The La Liga selection is likely to be the last TOTS that EA SPORTS will let the community vote for itself. Voting on the equally significant divisions of Serie A in Italy and Ligue 1 in France have not been announced, it is presumably the last chance to participate in TOTS democracy.

All TOTS nominees in La Liga