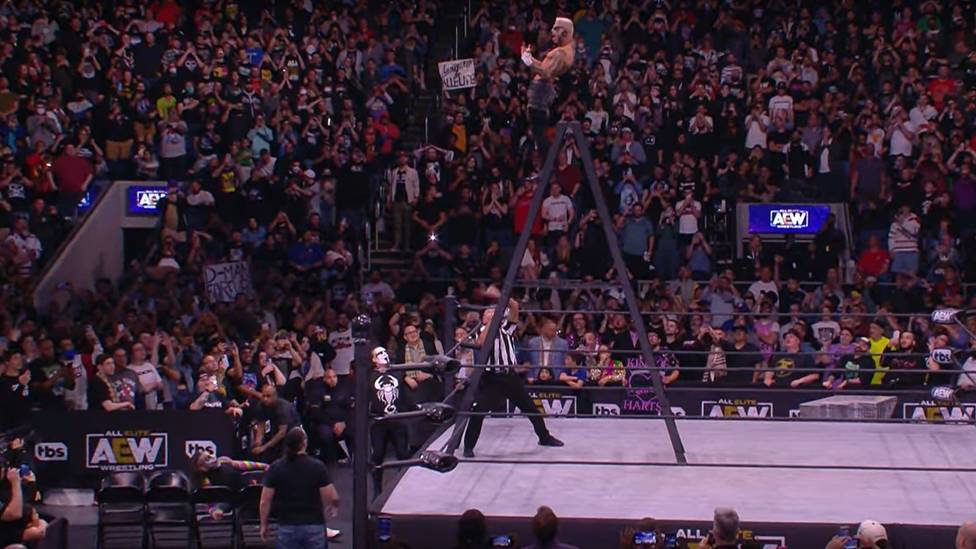 At AEW Dynamite, Darby Allin vs. Jeff Hardy provides the moment of the night. Feuds between CM Punk and Hangman Page and MJF and Wardlow heat up

Fans have been waiting for this duel since wrestling legend Jeff Hardy landed at AEW after his WWE exit – and it delivered exactly what it promised.

On the TV show Dynamite, the “Charismatic Enigma” met his young revenant Darby Allin, who, like Hardy, has made a name for himself with breakneck stunt performances.

Darby Allin with the highlight – but Jeff Hardy wins

In an “Anything Goes Match” with no rules, both lived up to their reputation, with Allin providing the moment of the evening when he jumped down from a ladder set up in the ring onto Hardy, who was positioned outside, in front of his legendary mentor Sting – and both landed an erratically brutal landing into several chairs set up in the process.

In the end, though, it was veteran Hardy who prevailed as he countered Allin’s finisher Coffin Drop and pinned him with a Crucifix. Hardy thus advanced to the semifinals of the memorial tournament for Owen Hart, who died in an accident, which has gathered momentum two and a half weeks before the Pay Per View Double or Nothing.

The second tournament match of the evening saw Dax Harwood of the duo FTR and Adam Cole go head to head in the opener. The end of the match played on the special circumstance that Harwood is an avowed admirer of Owen’s brother Bret Hart, while for Cole, the latter’s arch-rival Shawn Michaels is the GOAT.

As was once the case with the duel between Bret and Shawn at Survivor Series 1997, which ended with a real-life scandal, the bout ended with Cole resisting a Sharpshooter’s approach and forcing the win with a Bret Hart finisher’s own quote – but unlike the “Montreal Screwjob”, fair and square.

The women’s Owen Hart Foundation Tournament also progressed in the presence of Owen’s widow Martha and children Oje and Athena: freshly debuted Toni Storm defeated Jamie Hayter and will meet the winner of the duel between former women’s champion Britt Baker and the unheralded “Joker” in the semi-finals.

Looking ahead to Double or Nothing, the World Title match rising there between Champion Hangman Page and CM Punk was also pushed.

After Page made it clear last week that the duel would not be a friendly one with a surprisingly venomous speech against Punk, Punk was now playing head games as well: He defeated Page ally John Silver of the Dark Order with the Buckshot Lariat, Page’s own finisher – and followed it up with verbal provocations, which Page answered with a stinker.

A special highlight was delivered by arch-villain MJF, who, as in his feud against Punk, took advantage of the fact that Dynamite was stopping off in his native Long Island this time for some particularly creative incursions.

The usually booed but now acclaimed MJF first presented a propaganda video in the style of the documentary series “Dark Side of the Ring” for his contract signing against ex-bodyguard Wardlow, in which Wardlow’s turning away from him was portrayed as a shameful intrigue.

Special punchlines: As in Dark Side of the Ring, old MJF rival Chris Jericho was the narrator of the video – well paid, as Jericho made clear -, in addition to legends like Taz and Jake “The Snake” Roberts, Barry Horowitz, a legendary “jobber” who lost every match in the former WWF for years, also had a word to say.

MJF finally presented Wardlow, who was handcuffed and led to the ring, with the terms of the match to get out of his contract with him – similar to what once happened in MJF’s breakout feud with Cody Rhodes: Wardlow must take ten blows with a belt and face MJF’s buddy Shawn Spears in a Steel Cage Match – with MJF as guest wrestler.

Wardlow stoically endured MJF’s gogo show for a long time and signed the contract, but then beat up on the security guards and finally wanted to go after MJF. MJF’s “lawyer” Mark Sterling intervened – and took a powerbomb through a table himself as revenge.

– Cult figure Danhausen conceded a quick defeat in his ring debut for AEW against Tony Nese when he got distracted by Nese’s manager Sterling – but there was still good news for Danhausen in the end: young star Hook responded to his weeks of advances and accepted his offer of friendship with a handshake, so the longed-for “Hookhausen” duo is a reality.

The Jericho Appreciation Society cashed in on weeks of attacks on Eddie Kingston and other crowd favourites: Not only Kingston, but also his old friend Jon Moxley confronted Jericho – with Moxley’s allies Bryan Danielson, Wheeler Yuta and William Regal of the Blackpool Combat Club. As a climax, Jericho cashed in on a fist punch from Regal.