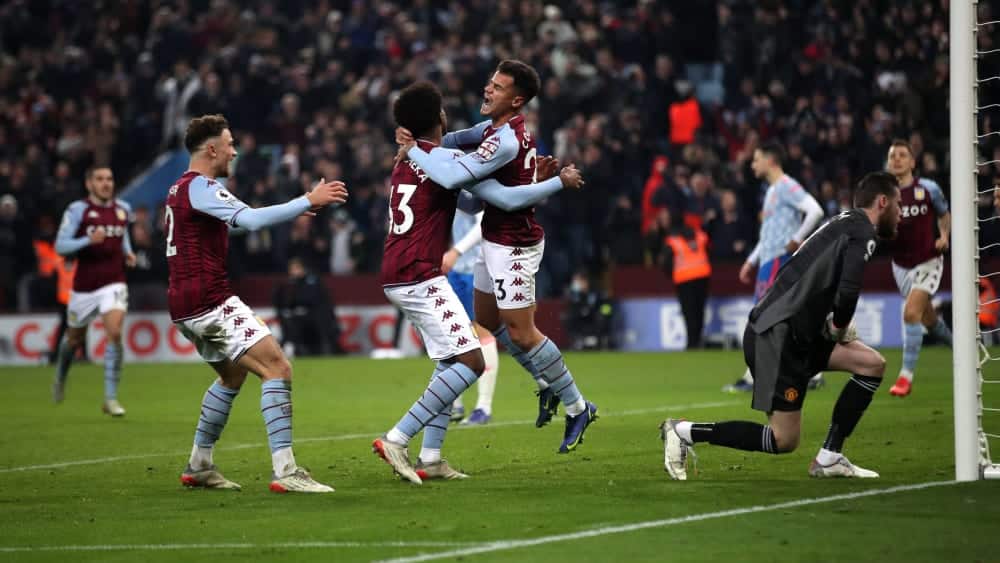 0:2 becomes 2:2: With a courageous performance, Aston Villa earned a draw against Manchester United in a fast-paced match. Thanks to new signing Philippe Coutinho, of all people.

Just five days after the 1-0 defeat in the FA Cup, Manchester United were once again up against Aston Villa – and as in the cup, they were able to celebrate early. Bruno Fernandes gave the Red Devils the lead after just six minutes with an assist from Villans goalkeeper Martinez. A finish from outside the box slipped through the legs of the Argentine in the home side’s goal.

In contrast to recent weeks, United, again without the injured Cristiano Ronaldo and starting with Elanga, Alex Telles and Matic for Rashford, Shaw and McTominay, looked more composed and solid. But Martinez stood in the way of the second goal when Greenwood and Alex Telles scored (18th, 29th, 33rd).

Gradually, Aston Villa came into their own. Watkins and Buendia, however, failed to find de Gea (32nd, 36th) – as did newcomer Digne, who was included in coach Steven Gerrard’s starting eleven after his transfer (43rd).

United’s goalkeeper was also called upon at the start of the second half when he made a superb save from Ramsay’s finish in the midst of Aston Villa’s frenetic period of pressure (49th). In the following, a fast-paced and open game developed with chances on both sides, initially with the better end for United: After a misplaced pass by Sanson, Bruno Fernandes soberly chased the ball under the crossbar (67th).

But then the great appearance of Philippe Coutinho was to come. Substituted in the 68th minute, the newcomer, on his debut, finely prepared Ramsey’s goal (77th) – and only five minutes later he himself scored the celebrated and deserved equaliser. Ex-Liverpool professional Coutinho, of all people. In the end, it remained a fair draw, with which ManUnited continues to tread water, and Villa can at least partially take revenge.